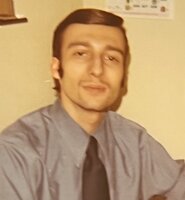 Born and educated in Brooklyn, New York, he is the son of Bertha Yorkowitz (George) McGowan and the late Joseph Taddeo.

Robert had multiple positions in retail.

He loved building model scale cars, which he took great pride in.

He is survived by his beloved mother and stepfather Bertha (George) McGowan, as well as his son John Taddeo.

Interment will follow in the Jonesville Cemetery, Clifton Park.

Robert’s family would like to extend their most sincere appreciation to everyone who has cared for him at Schuyler Ridge.

Please feel free to offer you on-line condolences by using that tab on this website.