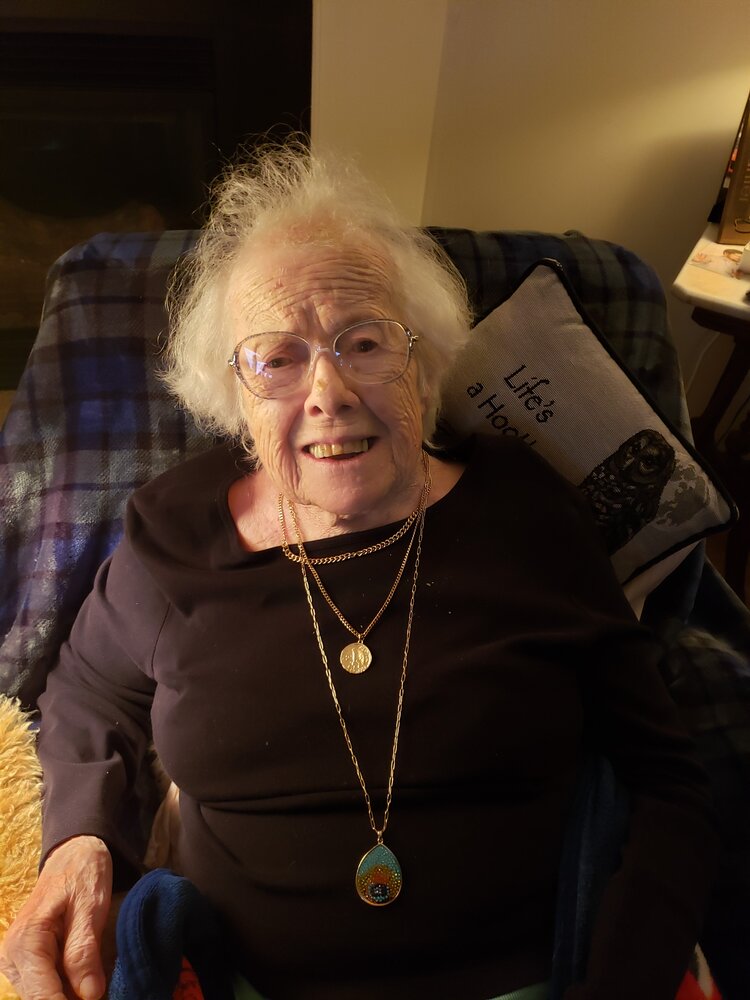 Please share a memory of Virginia to include in a keepsake book for family and friends.
View Tribute Book

Born in White Plains, New York, she was the daughter of the late Robert and Marion Warren Howe and the wife for 44 years of Harlan B. “Bud” Perrins, Jr. until his passing on July 25, 1997. She was a graduate of Scarsdale High School in Scarsdale, New York.

Prior to motherhood, Ginny began her career working in New York, NY during WW II, first in her aunt, Hilda Henderson’s wholesale gift business and later as a secretary at Borden and other companies. At one point, she worked for a company working on a top-secret nuclear project She loved being a working girl and typed 120 words a minute.

Her interests and hobbies reflected her curious nature and love of beautiful things. She enjoyed antiques and “collectables,” Corvettes and other “sexy” cars, rides in the country, the American Songbook and jazz music, especially Bill Evans, people-watching, exploring new places, and all of the natural world – sunsets, turning leaves on the trees, birds, horses, cats, and dogs. She was fun-loving and had a wonderful, silly sense of humor that was recognized in an instant everywhere she went. She was a favorite of store clerks, wait staff, bank tellers, doctors, and nurses, who were charmed by her smile, self-deprecating remarks and humble demeanor.

Devoted mother of Thomas “Tommy”. Perrins of Clifton Park, Harlan (Mardine) Perrins, III of East Greenbush, Warren (JoAnna Ruisi) Perrins of Rifton, Sally (Richard) Ott of Colorado, and stepson, Steven Perrins (Susan) of Colorado and Arizona. She was preceded in death by her sisters, Harriet Kelly and Suzanne Cardwell. She is survived by many beloved grandchildren, nieces, and nephews.

Private funeral arrangements have been entrusted by the family to the Gordon C. Emerick Funeral Home, 1550 Rt-9 Clifton Park, NY 12065.

The Perrins family wishes to express their sincere appreciation to Claire Mensler, Ginny’s dear friend, devoted caregiver, and partner in crime, for her loving care and friendship with Ginny in her final years.  They shared many laughs and good times together right up to the end.

To send flowers to the family or plant a tree in memory of Virginia Perrins, please visit Tribute Store

A Memorial Tree was planted for Virginia
We are deeply sorry for your loss ~ the staff at Gordon C. Emerick ​Funeral Home
Join in honoring their life - plant a memorial tree
Online Memory & Photo Sharing Event
Online Event
About this Event

Look inside to read what others have shared
Family and friends are coming together online to create a special keepsake. Every memory left on the online obituary will be automatically included in this book.
View Tribute Book
Services for Virginia Perrins
There are no events scheduled. You can still show your support by sending flowers directly to the family, or planting a memorial tree in memory of Virginia Perrins.
Visit the Tribute Store

Share Your Memory of
Virginia
Upload Your Memory View All Memories
Be the first to upload a memory!
Share A Memory
Send Flowers
Plant a Tree