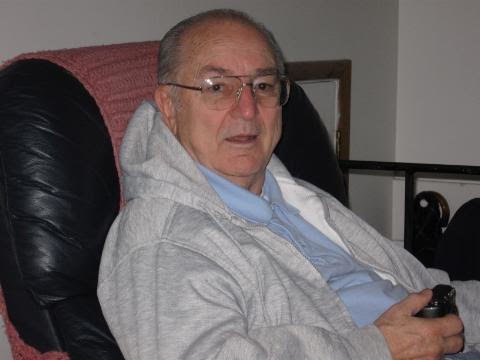 Roger George Breton, 91, died at The Eddy Village Green in Cohoes on June 19, 2021.  He was the son of Marie Jeanne (Godard) Breton and Alphonse Joseph Breton, and was born August 21, 1929 in Woonsocket, RI.

Roger graduated from Woonsocket High School in Woonsocket, RI.  He met his future wife, Constance Breton, at a bus stop.  She wrote to him dutifully while he served for two years in the U.S. Air Force in North Africa.  They were married in 1953 at St. John's Church in Slatersville, RI.  They had six children in the next eight years: their only son, David died as an infant.

In 1967, the family moved to Clifton Park, NY, where Roger was a devout parishioner of St. Edward The Confessor Church for the rest of his life.  While raising his five daughters, Roger worked as a salesman.

After retiring, Roger enjoyed traveling with his wife.  He loved his home and was always happy to see his grandchildren and great-grandchildren.  He loved to take his daughters to lunch.  He liked to garden, woodwork and build cabinets and benches.  He will be remembered as a comedian who loved to talk and joke with people.  He was also a member of the Knights of Columbus.

He is predeceased by his wife, Constance, his parents, his son David, his brother Gerard, and his sister Loraine.  He is survived by five daughters, Kathleen Frakes (George), Mary Breton, Barbara Margolius, Carol Breton, and Elizabeth Marre (Ernie).

Funeral will be held on Tuesday at 11:30 am  at St. Edward The Confessor Church, 569 Clifton Park Center Road Clifton Park, NY 12065 where the Mass of Christian Burial will be celebrated.

Interment with full military honors will be in the Gerald BH Solomon Saratoga National Cemetery in Schuylerville, NY

In lieu of flowers, please send donations to Catholic Charities, the American Stroke Foundation, or the American Diabetes Association.

The family would also like to thank all the people at the Eddy Village Green in Cohoes who lovingly cared for Roger as if he were part of their own family.

To send flowers to the family or plant a tree in memory of Roger Breton, please visit Tribute Store
Monday
28
June

Share Your Memory of
Roger
Upload Your Memory View All Memories
Be the first to upload a memory!
Share A Memory
Send Flowers