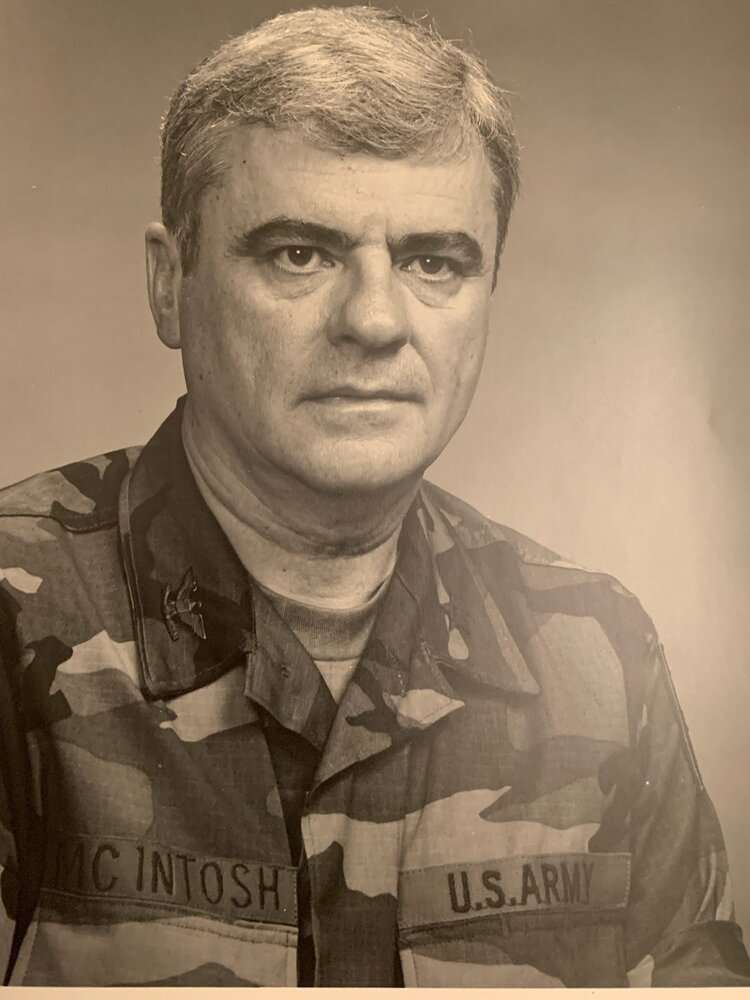 Please share a memory of Brigadier General William to include in a keepsake book for family and friends.
View Tribute Book

Brigadier General William F. McIntosh,  Ret. US Army,  86, of Niskayuna passed away peacefully surrounded by his loving family on Tuesday August 30, 2022 at his home. He was born on Oct. 10, 1935 in Manhattan and was the son of the late Francis and Mildred Emms McIntosh.   General McIntosh began his military service as a Private in the Artillery in 1953, and his full-time career in 1958. He quickly rose through the enlisted ranks attaining the rank of SFC E7 in seven years. After completing Officer Candidate School he was commissioned a Second Lieutenant, Field Artillery in 1961. He served in increasing positions of responsibility from Forward Observer to Battalion Executive Officer. In 1978 he was promoted to Lieutenant Colonel and assigned a Deputy Director Military Personnel and Administration, State Area Command. In 1981 he was promoted to Colonel and assigned as Director Military Personnel, New York Army National Guard and subsequently as Director of Intelligence. On 15 May, 1987, he was appointed as The Adjutant General/Chief of Staff of the New York Army National Guard, and in 1987, the added position of Superintendent, Empire State Military Academy.

General McIntosh served two tours of active duty, in 1970 and 1983, and was placed on the Retired List of the United States Army on 10 October, 1995. Thereafter he held the position of Chief of Operations, New York State Emergency Management Office, where he was responsible for directing and coordinating the state’s response to natural and manmade disasters and emergencies throughout New York.

Brigadier General McIntosh held a Bachelor of Science degree from the State University of New York at Albany. He was a graduate of the Field Artillery Basic and Advanced Course, the Air Observer Course, the Adjutant General Military Personnel Officer and Advance Course, the Command and General Staff College and The National Defense University. He also completed numerous courses and exercises in Emergency and Risk Management at the Federal Emergency Management Agency.

He was a member of the Military Officers Association of America, The Association of the United States Army, The American Legion, The Disabled American Veterans, and the Field Artillery Association. His military awards include the LOM, MSM, ARCOM, AAM, the National Defense Service Medal, Armed Forces Reserve Medal, Air Observer Badge, and numerous state awards, including the Conspicuous Service Medal.

Funeral service will be at 1:00 pm in the funeral home with interment and full military honors in the Gerald BH Solomon Saratoga National Cemetery in Schuylerville.

To send flowers to the family or plant a tree in memory of Brigadier General William McIntosh, please visit Tribute Store
Thursday
8
September

Share Your Memory of
Brigadier General William
Upload Your Memory View All Memories
Be the first to upload a memory!
Share A Memory
Send Flowers
Plant a Tree